Monks — Monks was almost my first exposure to Abilene. Before we moved here in 2010, I saw their “Keep Abilene Boring” t-shirts, and I had hope for the city. I thought if someone had that kind of humor, I could be happy living here. Some folks in town don’t understand this catchphrase and/or think it’s a bad idea. I think it cleverly highlights what is good about Abilene: the low-key friendliness, the lack of traffic = “boring.” Striving to be something we’re not, emulating another city for instance, I don’t think is the way to go.

So anyway, Monks is a functional gathering place downtown. 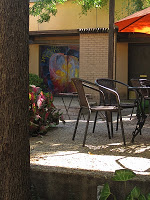 Mezamiz — (“Maze-ah-me” sometimes I think I’ve heard people say, “Mehz-ah-me(s)” — the name comes from the French “mes amis” which means “my friends”) is found inside the surprisingly pleasant courtyard area which makes up The Cloisters shopping area, complete with a large cottonwood tree. A collection of small shops including an insurance agent, several beauty salons and an interior design shop circle around the courtyard, which also has umbrella tables and chairs and is a smoking area. Mezamiz has a deck that overlooks the surprisingly woodsy Elm Creek. The interior offers cozy seating (couches and armchairs) mixed with an assortment of different-sized tables, along with local art. They also have a small, attractive meeting room available for groups. In 2012, I was disappointed when they added speakers projecting out into the courtyard and a selection of alcoholic drinks. My preference is a quieter, warm place to read books and meet with friends, but I still go there. The Cloisters and whomever designed it must have had a serene contemplative place in mind. A running fountain with goldfish, and plenty of greenery contribute to the relaxing vibe. But the rustling trees and burbling fountain as the soothing soundtrack of life are obscured by the piped-in music. Maybe there could be certain quiet hours?

Big Country Coffee — this one might not qualify as a coffee “shop,” since it’s more of a drive-through – but they do have some seating inside. They also host food trucks here sometimes.

Note: Both of the following bookstores, Hastings (on S. 14th by the South branch library) & Books-A-Million (at the mall) have small coffee shops inside & some seating outside. And of course there are two Starbucks in Abilene — I just reviewed the local places above.