Photo by Margaret Lara-Garcia/Tim and others responsible for renovation

Tim James started at the bottom. Literally beginning in the basement mechanical room of the three-story Dyess Medical Center building, he masterminded renovating, painting, adding décor and utterly transforming the entire facility over a period of five years. Tim didn’t miss a spot. This transformational feat was the crowning achievement of his civilian Air Force career.

“He turned this place around,” says Master Sergeant Jack Williams. He describes it pre-renovation as, “gloomy, typical” and “circa 1970.” After the remodeling, he says that coming in to the building, “took you away from the Air Force for a moment.”

Even normally barren stairwells presented walls for murals, featuring planes and flying themes painted by a local artist. Mr. James took his Midas touch outside the walls as well, and bit by bit re-did the grounds, including a courtyard serenity garden complete with a bubbling fountain.

Theresa Lawrence, a long-time staff member of sixteen years remembers, “It was pretty bare, your typical sterile.” Several years and a lot of effort later, she appreciated the outstanding results, “It was beautiful. Anybody that came to visit — inspectors — had to meet him.”

Written in one inspection team’s report was the following recognition, “Mr. Tim James … for the phenomenal work he has done transforming this 1954-era building into an efficient 21st century ambulatory clinic with world-class ambience.”

U.S. Air Force bases across the world are known for looking the same. That is, bland and featureless. Buildings are regulation brown, with regulation brown signs staked in the ground in front of them. Without the signs, someone might easily mistake for example, the library for the Headquarters building.

In contrast to this uniformity, the Dyess clinic rises up out of the surrounding West Texas landscape, glowing with a subtle orange tint. Tim says he went with a “Tuscany feel” because it never gets old or boring. Getting the outside paint color approved was actually a bureaucratic battle.

When approaching the building, one notices artistically scattered benches, carefully placed sculptures and pleasing landscaped areas. Inside the 100,000-plus square feet, things get even greener and more colorful. Arrangements of lush, live plants adorn waiting areas, a waterfall feature graces an entrance, and those one-story high murals brighten stairwells. All the decorative touches welcome and calm visitors, adding value to the medical care they receive.

The improvements didn’t always happen easily. Anyone who knows bureaucracy knows money can be a problem. There are hoops to jump through and reams of paperwork to fill out. Long budget-approval processes can discourage even the most determined.

Dee Rollins, a well-respected former secretary, says about Tim in regards to those challenges, “He wasn’t in the mode of, ‘If they don’t give me money, I can’t do anything.’” She said that James had “these visions” and projects ready for if there was fall-out end of year money.

“I do not like to center myself around people with negative energy,” Tim says.

His friendly and professional demeanor, and the goodwill he generated with the building, full of positive improvements, recently resulted in a flurry of hugs, smiles, and handshakes all around, when he walked through the facility after almost three years of retirement. 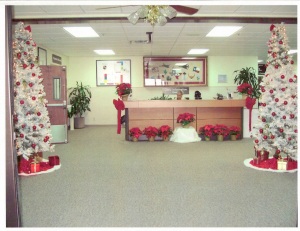 “He’s a motivator. A go-getter,” says Margaret Lara-Garcia, Director/Site Manager. “Mr. James took pride in his building,” she says whether he came in a business suit or not, he got out there and did what needed to be done. “Once we had a water leak, and he was wading through the water in his suit.  He would take care of it.  He’d take off his jacket and start working. That’s him, that’s his nature, and he cared a lot.” She goes on, “He’s a very regal man. He likes the silver and the gold. ” She also said in fact, with a perfectly straight face and a knowing nod, “He was a king in a past life.”

Timothy James was born tenth in a family of twelve children in Abilene. He says both his parents were very hardworking people.

His mother especially appreciated beauty and “could take a twig and make an arrangement of it.”

He says making “commanders shine,” building good working relationships, going around naysayers, and being prepared all helped accomplish his goals– as did a lot of plain hard work.

He began his first job at Dyess in 1974 as a card-punch operator when he was eighteen. Over the years he describes persevering through job changes and being passed over for promotion.

Throughout the time, he “loved creatin’ and loved doin’ things.” He describes a strong sense of being taken care of by God and exudes a satisfaction in helping others, while being true to himself.

The Dyess Medical Clinic had failed several inspections when Tim came aboard as facility manager in 2002. “The plumbing was bad, the cosmetics [were] terrible,” says James.

“Before” pictures of the facility show a lot of dust, workers wearing hard hats, and rooms stripped down to their framework.

The “before” – bland and tan

Photo of the serenity garden

There were some who doubted or stood in the way of his ideas. As James puts it, “some people don’t want to MOVE.” A few were critical of plans for improvement. Tim’s solution ? He says slowly and with emphasis, “I went. Around them.” After all, he had headquarters’ approval, and spent a lot of time and effort communicating creatively and persistently about his plans.

He says with a calm intensity and forcefulness, that sometimes, “… you have to fight!”

A commander spoke of him as “professional” and he was also referred to as “disciplined.”

He’d invite people over and explain. He’d send before and after pictures. He describes that, “Once I proved what I was about” and built trust, including scrupulously tracking all funds, implementing projects became easier.

Much extra work was personally completed on his own time at the weekends.

There were inevitable setbacks. Tim’s philosophy about when discouraging times occur is simple but powerful, “Stuff happens, you pray about it, rest, and go on … keep smilin’ and goin’ on.”

Part of his motivation to go on was the response of people when they’d see special displays like the bright orange pumpkins he’d decorate with for Halloween each year. It was, “so fascinating to see their eyes light up.”

Tim only retired from one job when he left Dyess, he still works at the State School in Abilene. As he speaks about his work with severely disabled folks there, he appears to deeply enjoy and derive great satisfaction from the job. “Just helpin’ someone who can’t help themselves. You have to have compassion. And people can feel that.”

He also says his own garden at home “saved his life.” Working in it has been therapeutic, and he is continually “having wonderful ideas” for improvements.

Tim sums up his philosophy on work-life, “Take pride in your little area – and try to be happy.”

“That was a good day.” Final touches on entrance

He accomplished much, taking pride, and working step by step, contributing a great amount to the community and undoubtedly touching many lives.

After touring the building, as he left through the coffee shop entrance – an addition he’d worked hard to make happen – a man came running up to shake his hand, with the words, “You don’t know me from Adam, I’ve only been here a year but…” he wanted to thank Tim for the building.

Living plants, and the effects of a soothing environment on a person’s mental and physical well-being are scientifically proven. Whether Mr. James knew this instinctively or because of research or experience, he had fun he says, making the entire place exactly how he thought it should be, leaving “no ugly part of it.”

A version of this article appeared in Big Country Magazine.

« Meet Elaine Yielding – China Painting Artist
What This Blog Is About »