Posted by Heila ⋅ October 2, 2013 ⋅ Leave a comment
Filed Under  Quality of Life 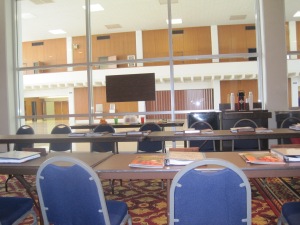 The Civic Abilene board meeting on April 9th was very short, lasting only about 15 minutes. I was greeted and several times offered beverages and a piece of pound cake from a table of refreshments to the side of a rectangle of long tables set up for board members, in the middle of what is referred to as the “red carpet lobby” of the Civic Center. Members’ names were engraved on metal nameplates attached to wooden stands. Also at each place was a copy of three different magazines: Abilene Scene (produced by the Abilene Cultural Affairs Council, an affiliate of the Abilene Chamber of Commerce), Travel Host (which evidently had an Abilene mention in that issue), and the most recent issue of the bi-annual (Spring and Fall) Abilene Living magazine. “Sylvia” had provided copies of the magazines. I’m pretty sure there were 15 members of this board, not all being present that evening.

An employee of the Civic Center presented some numbers about use of the facility. In February, there had been 37 events, and the place was at 100% capacity for weekends and at 81% capacity for weekdays. I’m not sure how these numbers were figured.

The board decided to renew their advertising contract for a full-page, back cover ad in the Abilene Living magazine, at a cost of $5,700 dollars annually. They mentioned that they believed the magazine is placed at Texas state entry centers, at DFW airport and at locations south to Lubbock. One of the members joked that he hoped they renewed this contract, as his son is a publisher of Abilene Living magazine.

I can’t remember if some board members volunteer commitment terms were ending, but there was discussion by several that they had no intention of quitting their places on the board – they enjoyed it immensely and planned to stay. Some board members began visiting and eating snacks after the formal business adjourned.

I have to say that I do love America and the open meetings of our government. There were several chairs set up for the public, but I was the only one there visiting that day.