//
you're reading...
Children, Cooperation, Parks, Recreation, Things to Do

I talked with Lydia Long by phone, to ask about the history and establishment of the Abilene dog park. I had heard that she and some others had made the park happen through grassroots efforts.

Camp Barkeley, as it is called, is located out adjacent to the zoo and Nelson Park. Also nearby are the Splash Pad and a deluxe playground.

Here’s what she said about how it came to be ~

She and some others, “had set up a non-profit to help do green spaces and parks in the West Texas area.”

She says that when they were starting to kick-off, and figure out where they wanted to go, another group came to them and suggested the idea of a dog park. The two groups decided to join forces, and went to the City with the idea. Evidently it didn’t fly at first.

So, they “took some time and did some petitions and got signatures.” The petition’s said something like, “Yes, if we had a dog park we’d love to use it.” And they got 400-500 signatures going to pet stores, vets, and walking Art Walk with their clipboards.

Then they met with the City manager and told  him what they we’re interested in doing. They asked, if they were to raise the money for the park, could the city could donate the property? The City agreed to supply the amount of $150,000. “They sat down with us, and figured out the equipment, etc.” Gail Russey of the City Parks & Recreation Board met with members of the dog park group. Lydia called all the members of that particular Board and “told them what we were trying to do – went and took some people with me and showed them the concept – there was a lot of grumbling (in the community) – things like, ‘I don’t need a dog park ‘cause I have a yard’ – ‘there’s going to be poop, etc.'”

She relates that they then, “Came to find out that a dog park’s not so much about the dogs. A meeting place. That was part of it.” 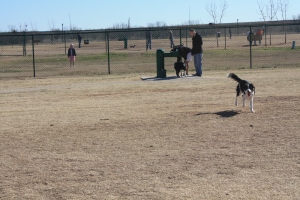 The City gave them a time span of a couple of years; and found what they determined was a good location, a piece of property to use.

After talking with the City, Lydia says she thought they thought (and they might’ve thought): “That’s the last we’ll hear of them.”

But she said, “When I get my teeth into a project I get obsessed.” Others helped along the way. “Some people stuck out the whole process start to finish. Some helped at different points.”

Lydia says they wrote letters, “to everybody in town who does grants; knocked on doors, and said we want money for this.”

They developed mail-outs through the city, since it was a city project. These requests went in with the water bill. Now this method of fundraising is used often, but the dog park endeavor was the first to use it. 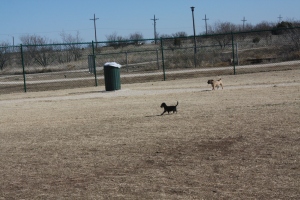 The organization had their finances accounted for and wound up getting a couple big grants of $20,000. “We had it set up through a non-profit in town.”   The other half of the funds came, “from people handing us their pennies.”

People would write checks for $5. They’d “buy” a water fountain or a tree — “people were invested.”

Long’s favorite story is about how a local businessman caught the vision for the project, and donated part of the fencing for the enclosures. She and he met out at the planned location. Ms. Long drives a little yellow Smart car, this man had a large pick-up truck. She was gregarious and excited, telling him all about the details. He didn’t appear to have much of a reaction. They parted ways. Then later on, she says, “he undercut everybody for the bids,” and they ended up with some excellent quality fencing. When she thanked him afterwards, she told him that at the time though, “you didn’t seem so enthusiastic.” He said, well you were so enthusiastic, and we thought that’d be something we’d like to invest in.

Other fundraisers included kids selling cookies, and donation buckets in pet stores. Organizers met generally on a monthly basis, and emailed each other. “We had the money in 6 months and built within a year.”

Other citizen-generated projects in Abilene (examples of one individual spearheading, helped by a small group of other folks) include:

– the Diversity Garden at the zoo 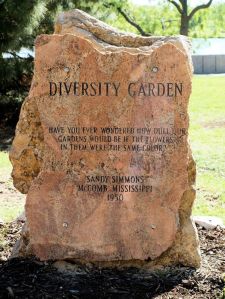 “Have you ever wondered how dull our gardens would be if the flowers in them were the same color?”

– the sidewalks along Rebecca Lane near Buffalo Gap Road

The park is named after the military installation that was in this area for training during World War II. (Clever play on words for a dog park, yes?) Find out more about the history of the real Camp Barkeley at the 12th Armored Division Museum. There were over 800 German POW’s in the camp during 1945, and some locals have some stories about those days.

The West Texas Park People still exists, and Long says they like to do projects generated by the public. The City of Baird has been raising money for a park and they’ve donated to them. They have some materials ready for a greenhouse and are looking for people wanting to help put that together. “We want to raise plants and sell them for fundraisers.” 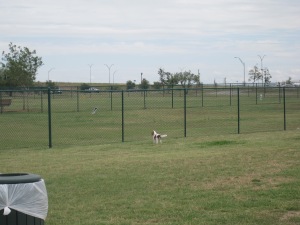 A little dog alone that day in the small dog run, looks with longing towards the big dogs playing in the more active large dog run.