This is a World War II museum, and a surprisingly good one. Its building looks like nothing much from the outside and is easy to drive right by, but is worth going in – and plan for some time to investigate. I’d say about an hour and a half to get a good look.

After touring this museum though, I have a better awareness of why those very numbers — of groups, ‘divisions,’ or squadrons, did in fact and do still, mean a lot to some people. It’s because the numbers represent friends. They represent comrades-in-arms, those who’ve served together in battle and experienced some of the most dramatic, traumatic, life-changing moments of their lives together.

This place is a lovingly assembled and surprisingly professional collection of artifacts and memorabilia which paints an interesting picture of the people and the times. The 12th Armored Division served in Europe, but they received their training in Abilene, Texas.

Outside in the back, you’ll find an area containing old vehicles, including a tank. You can walk around them and get up close for a good look.

There’s a small separate room with several items representing the Nazi regime and the S.S. the likes of which I’d never seen, especially that up-close – which is where the small, homemade feel of this museum is nice. Those really brought home for me that this stuff was not the subject of a Hollywood movie, but real-life.

In the basement, you’ll find a number of detailed dioramas. These small scenes recreating the place, time and action experienced by members of the 12th Armored Division really bring the experience to life.

Miniature tanks in snow, with men in the freezing river

There are a few samples of wall posters from the era. I found the subject matter and graphics interesting, especially when compared to today’s mostly computer-generated art.

Find out more too, about this black veteran, who was posthumously awarded a medal for courage and ability. 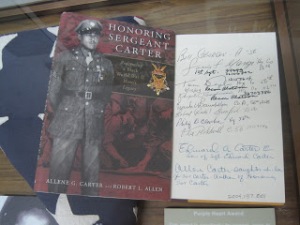